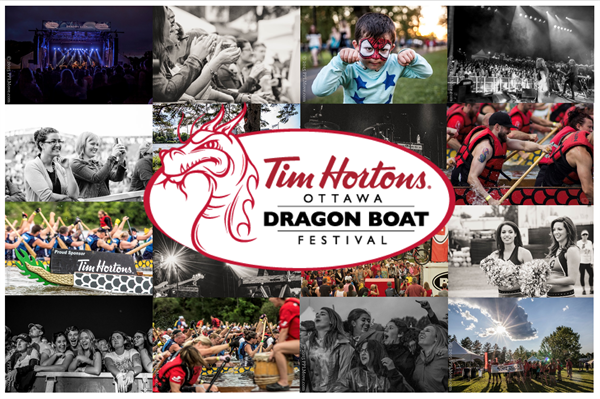 The Ottawa Dragon Boat Festival is pleased to announce a new three-year agreement naming Tim Hortons as the festival’s title sponsor through 2018.

The three years covered in the agreement are each going to be very special for their own unique reasons. 2016 is the 10th anniversary of Tim Hortons support of the Festival, first as the sponsor of the Children’s Area before becoming its Title Sponsor. The 23rd Annual Edition will be held from June 23-26, 2016 at Mooney’s Bay Park, Ottawa. The agreement also includes the 2017 Edition when the Festival will be helping to commemorate Canada’s 150th celebration and 2018 which will be the Festival’s 25th Anniversary!

"We are thrilled to again be the title sponsor for such an incredible event. Giving back is important to us and the Tim Hortons Ottawa Dragon Boat Festival benefits so many great causes.  The festival is great for families, challenging and rewarding for participants and wonderful for our community." – Christopher McCluskey, Ottawa Tim Hortons restaurant owner.

The festival is fortunate to have this long-term partnership and to secure its title sponsor through it’s 25th anniversary in 2018. Partnering with an iconic brand like Tim Hortons and more importantly an organization that gives back to it’s community in this way has been so important to the longevity and impact the Festival has been able to have in the National Capital Region. Festival CEO John Brooman says “We are truly honored to continue our long term partnership with Tim Hortons. Their support has made so much possible for our event and our success reflects their continued belief in us. Keeping our festival free to the public while we continue to grow has been important to the organization and to our patrons and Tim Hortons is integral to that. We greatly appreciate Tim Hortons and all the local store owners, we couldn’t do it without them. We look forward to the continued support that Tim Hortons has shown over the past ten years. Together, the next three year’s celebrations will be spectacular in every way!”

The Tim Hortons Ottawa Dragon Boat Festival is a multi-day celebration of the arts, sports, culture and heritage that attracts over 75,000 visitors each year. The Festival, boasts 200 teams in competitive, corporate and community categories, is one of the hottest sporting and entertainment events in the Nation's Capital. Recognized as North America’s premier dragon boating festival the four day celebration offers free admission to multiple stages with world class programming, marquee concerts, amusement attractions, sports demonstrations, a variety of artisans, exhibitors, delicious culinary treats, beach-side bar, children’s area and non-stop racing. The Tim Hortons Ottawa Dragon Boat Festival is made possible by the continued support of Canadian Heritage’s Building Communities Through Arts and Heritage, Celebrate Ontario and the City of Ottawa Partnership Program.

Tim Hortons, part of Restaurant Brands International, is one of North America’s largest restaurant chains operating in the quick service segment. Founded as a single location in Canada in 1964, Tim Hortons appeals to a broad range of consumer tastes, with a menu that includes premium coffee, hot and cold specialty drinks (including lattes, cappuccinos and espresso shots), specialty teas and fruit smoothies, fresh baked goods, grilled Panini and classic sandwiches, wraps, soups, prepared foods and other food products. As of September 30, 2015, Tim Hortons had more than 4,700 system wide restaurants located in Canada, the United States and the Gulf Cooperation Council. More information about the Company is available at www.timhortons.com.