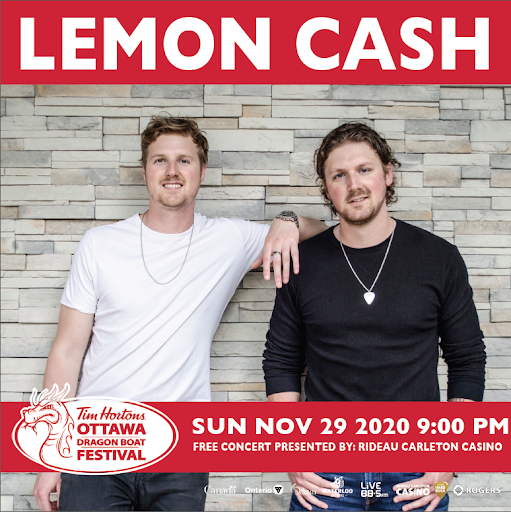 The Tim Hortons Ottawa Dragon Boat Festival is proud to present an evening with Lemon Cash that will be available on Rogers Cable 22 and the festivals YouTube.

This home-grown band consists of two brothers: Jeff and Cory Papineau. The band's name earned inspiration from their time as kids running a lemonade stand. The two would come home each day celebrating their hard-earned “lemon cash”. As they grew older, so did their interests (thankfully!) and they developed a passion for making music together.

Lemon Cash formed in 2014 as a cover band playing in front of family and friends in their hometown of Ottawa, Ontario, Canada. Once they gained experience from playing as a band in front of crowds, they decided to create their own original material and play as an alternative indie-rock band. They played numerous gigs and received lots of radio traction all over the province. After three solid years of playing as a five-piece band, they decided to split up on good terms. ​

Despite the disappointing turn of events, it did not prevent the brothers from continuing to carry the Lemon Cash brand name. Looking to evolve their music, they would transition to the country genre.

The inspiration to switch to the country genre is thanks to their parents: Jeff Sr. and Sandra. They introduced Cory and Jeff to country music when the brothers were young. Listening to a wide range of artists such as Garth Brooks, Brooks & Dunn, Tim McGraw, Joe Diffie, George Jones and George Strait, the warmth and comforting sound of the country music sound resonated with them growing up and inspired them to create music of their own.

Cory, the vocalist and guitar player of the duo, admires singers like Kenny Chesney, Bryan Adams and John Mayer. On the drums, Jeff always had an ear for harmonies and beautiful melodies. He appreciates groups such as Bee Gees, Beach Boys and Eagles, all-encompassing that easy listening sound. Although the two brothers seem to have their ears set on older music, there is no question that they are still keeping up with the times and remain in the loop for new music and new sounds to support their creativity.

Lemon Cash recently signed a single-song deal with multi-platinum producer Jeff Dalziel, whose accolades include 2018 CCMA, 2018 CMAO, 2019 CCMA and 2019 CMAO Producer of the Year. They are currently working together to form their sound, and they will select the most effective song for production, and connect with singers/songwriters in Nashville to help them expand their musical horizons.

Lemon Cash released their latest EP on October 31, 2019, titled Scary Sometimes. to compile the album, they met with their long-time friend and producer James Robertson to record a handful of original songs. Jumping into the world of country music, Lemon Cash is off to a heck of a start. With landing a deal with Jeff Dalziel, releasing an EP and making connections in the country world, it’s safe to say that these Ottawa natives are on the right path to what seems to be a promising career.

Audiences can tune into the virtual concert from the festival's youtube, Rogers Cable 22 or right here!