Canada's Largest Playground to be Built at Mooney's Bay Park 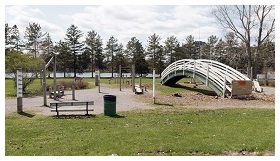 The Tim Hortons Ottawa Dragon Boat Festival is in discussion with our partners at the city to minimize the impact of construction on the event in 2016. The Festival will also work to create a spectacular new site in 2017 that will integrate the play structure for many years to come.

Articles on the Mooney's Bay Playground:

Opponents to Mooney's Bay playground to seek injunction - May 30th

Partial consultation was an option for Mooney's Bay playground, mayor says -May 27th

City workers will soon be removing trees and shrubs at the north end of the beach at Mooney’s Bay Park, clearing the way for some major changes, including the construction of a brand new play structure.

In a memo sent to residents May 9, River Coun. Riley Brockington said the city has been given the green light to take out 16 trees. All of them will be replaced and five existing trees will be relocated — all at the north end.

The city is also planning to remove three cordoned-off footbridges this spring from the same area as well as take out the existing Sue Holloway Park, an outdoor fitness area that will be rebuilt next year.